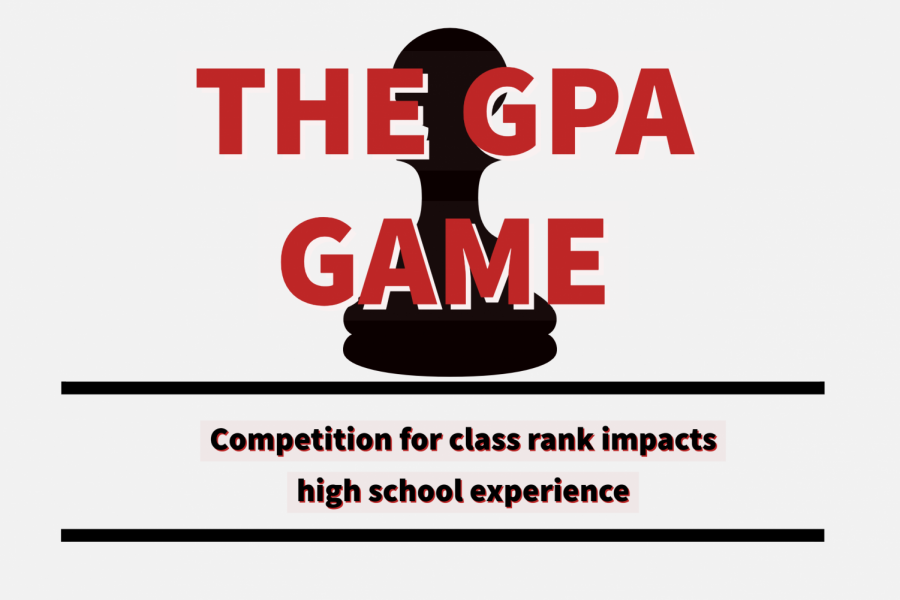 High school is full of games. There’s football and soccer and chess and water polo, even popularity, yet none of those affect the entire student body and school culture like the GPA game does.

As used in CFISD and several other districts, weighted GPAs change the way in which students think about school because it isn’t just about making an ‘A’ anymore. It’s about doing PE in summer, skipping a year of math in eighth grade, and taking computer science instead of band because on-level credits are detrimental on a weighted scale. Valedictorian in the class is no longer reserved just for the smartest; it’s also about how to play the game, a costly game with no clear winners.

So if GPA is a game, then let’s play.

Player One is your classic type-A overachiever taking seven AP classes and made a perfect score on the SAT as a sophomore. They take no on-level credits or electives, and is too busy doing homework to engage in any clubs or extracurriculars. In fact, they took an SAT practice test the night of homecoming.

What Player One doesn’t understand is colleges and high schools aren’t exactly on the same page when it comes to the significance of GPA. Universities value high grades and challenging coursework, but also like to see commitment to an extracurricular like band or volleyball, which are unweighted. The game as it stands now really only impacts class rank, yet students spend years obsessing over it and feel forced to choose between a high class rank and an enjoyable high school experience. Player One thinks being valedictorian is the only way to get into Harvard, when in reality, only one-fifth of colleges consider class rank the most important component for admissions.

Because of a single number, the culture in high schools is centered around competition to be the best, fueling mental health issues and impossible expectations. Instead of measuring one’s worth by their talents or values, students feel like their GPA is the only indicator of how smart they are. Putting so much value in a single number is unhealthy, and it’s causing unnecessary stress. According to a survey conducted by the social network “After School,” in 2018, 45% of 36,000 high school students feel overwhelmed by their amount of work, and that percentage is only getting higher. If weighted GPA wasn’t such a factor in the high school experience, the culture would shift from competitive to enriching, giving students less to stress about and more to explore.

At the end of her senior year, Player 1 isn’t accepted into any Ivy Leagues because of their lack of outside commitments or leadership roles. Their memories of high school will be filled with studying, studying and more studying. No school dances, no football games, no shopping with friends. They played the game harder than anyone, however they still lost.

Player Two cares about grades, but is equally passionate about being first-chair violin. They still take upper-level classes, dividing their time between studying and rehearsals. They are able to pursue interests and still make strong grades… the perfect balance, right? Not in this game.

Taking four years of an on-level class will put them lower than Player One in the class rank, even if they are equally smart. Colleges want to see something like orchestra on a transcript, yet their GPA suffers because of it. Weighted GPAs are supposed to reward students for taking more challenging classes, yet the weights have become so important that kids enroll in courses they aren’t even passionate about just to maintain a GPA.

Unweighted GPAs would actually protect high-achieving students because it would alleviate the pressure of taking only the hardest classes and allow for some freedom to pursue multiple interests. Pursuit of advanced level credit should be rewarded, but that reward should come when their first-choice college knocks on their door for high grades and an impressive course load including classes they care about.

The problem with the system is there are no boundaries or limits placed on advanced level credit meaning students feel pressured to stack their schedules with all upper-level courses if they want to be the best. This bars them from taking specialized electives that could enrich their high school experience. Player Two is pursuing their passion and making high grades, which is what students should do, yet that choice prevents him from reaching that ideal rank in their class. It’s a system catered to perfectionists, forcing everyone in it to seek perfection too.

Player Two was accepted into several good colleges, but didn’t get the praise and recognition that comes with being valedictorian. They may not be in the top ten percent, but when they look back on high school, they’ll remember the orchestra trips to Schlitterbahn, the late nights at competitions, and the countless friends they made. That’s more valuable than a number or a rank.

Player Three isn’t quite sure what they want to do after high school, so they took advantage of all the amazing programs the school district has to offer – a semester of photography, a year in welding, two years in health sciences. Instead of focusing only on classes that benefit GPA, they learned a wealth of workplace skills.

But by junior year, there’s a catch. CFISD offers a pass/fail credit for students entering their third year of one elective, meaning their on-level course for the year won’t count against their GPA. Player Three explored several different options, and now can’t pass/fail an elective because it won’t be their third year. This constricts them to a very limited path and punishes anyone that strays from it.

Because of the weights on K-level classes and pass/fail rules, a student’s position in the class rank can trace all the way back to decisions made in middle school. Should students be punished for exploring their options and trying new things? No. High school is supposed to be about preparing for the world and finding a path, but from middle school forward students are forced into one box of specific courses, all because of GPA.

Students aren’t the only ones losing, either. Because GPA is so important, students prioritize courses that are upperlevel, leaving many of the specialized classes with extremely low enrollment. Teachers go into this profession to enlighten kids passionate about journalism or culinary or video productions but don’t even have the opportunity to because no one can risk that credit. It isn’t fair to the teachers who need enrollment for their programs to thrive, and it isn’t fair to the students who feel like they don’t have a choice on what to take.

When Player Three graduates, they’ll have the full “high school experience,” but a lower GPA on the weighted scale and class rank. They didn’t play the game, and in ten years they won’t regret that.

High school isn’t meant to be a game, yet students’ entire lives revolve around this flawed system of give and take. If you don’t play the game, you lose. And if you play the game too hard, you lose too. There are no winners right now, and that will only change with a concise system free of the obsession with weights.

So here’s the game plan. It’s obviously unreasonable to completely do away with weights right now, but there is a way to limit them. Core classes should still be weighted because students should get more credit for taking AP physics instead of on-level, but there needs to be a maximum amount of upper-level classes that can receive weighted credit.

Education should be the last place where there’s a game with no winners. It’s likely no one intentionally set up the system to harm students, in fact it’s possible most aren’t even aware of it. Some will say that life isn’t fair and that students just have to deal with what they’re given, but that’s the complacent attitude that bars all positive change from happening. Agreed, life isn’t fair. But in education especially, the goal should be to set up all kids for success.

A limit on how many classes students can receive weighted credit for puts all students or “players” on a level and equitable playing field. Sure, some will still take seven AP classes because that’s who they are, but it doesn’t force every student to have the same path because in reality everyone cares about different things. Education is the great equalizer in America, and in a district as wonderful and advanced as CFISD, fairness should be the top priority. In a district with so many specialized programs, there truly is opportunity for all but that opportunity feels inaccessible for students trying to achieve a high class rank.

Unlimited weights hurt everyone, from the type-A overachiever to the kid in band and theatre and soccer. They are equally smart students with completely different mindsets, and none of them will be confined to the one-path system that is weighted GPA. Less emphasis on weights eliminates the game, which is the only way each player can be a true winner