Athletes Makensie Garner and Mason Culton each have Player of the Week awards to boast, but it's something much deeper than that which stands out. 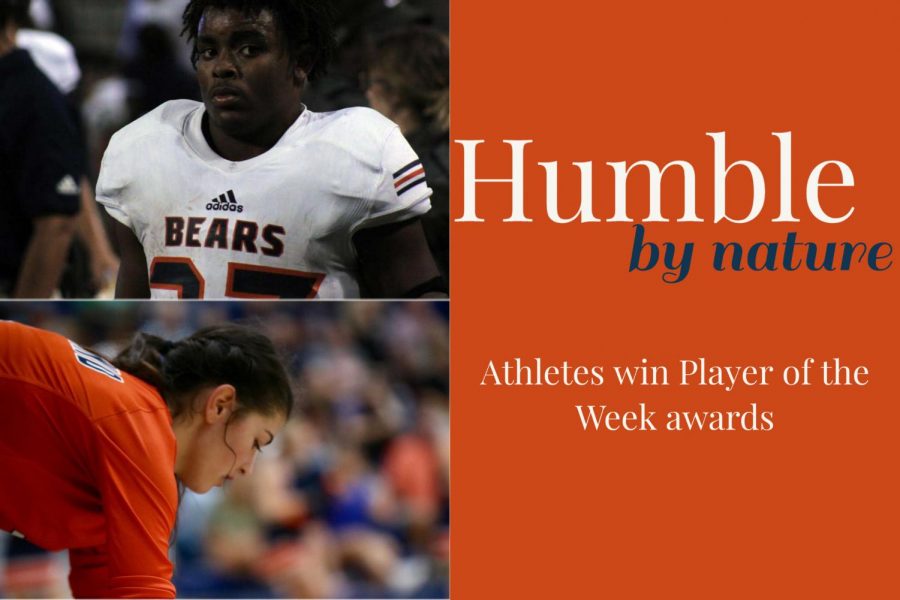 They almost seemed embarrassed by it.

The loud cheers of their classmates echoed in their ears, the TV cameras ever-present in the back of their minds. They held up the large frame containing their award for the cameras to see, cheeks flushed and sore from their shy smiles.

“I can’t believe it,” they cheered on the inside. They were partying hard in their heads, replaying all the hard work that got them that award.

In the fall semester, senior varsity volleyball libero Makensie Garner and sophomore varsity football running back Mason Culton won Player of the Week awards. Aside from their achievements, these two athletes have one particular thing in common: their determination and humility. According to their coaches, head volleyball Coach Verena Khalil and football running back Coach Lloyd Spotted-Wolf, the two athletes deserve these awards.

When asked about what inspired them to be modest, their answers differed. Garner says it’s because of the support she’s gotten from the people around her.

“I wouldn’t be able to be the athlete that I am today if it wasn’t for the abilities God has given me and all the effort my parents and teammates [put in],” Garner said. “I know this isn’t something that’s come from me. I know it’s come from people who have helped support me, so I can’t take any word for this because truly, it’s from all of them.”

Culton, however, says he’s modest because it was the way he was raised. Being humble comes naturally. From a young age, his dad taught him life lessons. Many of them were about having humility and not getting a big head.

“It was like a part of me,” Culton said regarding his humility.

But it’s not always easy for everyone. Just like anyone, Garner can admit that sometimes she wants the spotlight on her, but on the court, she knows she is only one part of a whole team, and she wouldn’t have it any other way.

“It’s realizing that it’s not just me in this,” Garner said, “it’s multiple people.”

Coach Verena Khalil and Coach Lloyd Spotted-Wolf sate that the athletes are hardworking and determined. However, outside of the practices and games, it’s their lives that have shaped their characters.

“A lot of people don’t know this about me but walking through seasons of loneliness and dealing with anxiety [has really shaped me]. It’s kind of allowed for me to just take a step back from a lot of things and realize there’s so much more to life than all of these things that are overwhelming me and causing stress.” Garner said. “ I think over the past, especially in high school, dealing with loneliness, anxiety and perfectionism… I think that’s something that’s really shaped me into who I am today.”

The embarrassment and the flushed faces will never fade awards and praise keep coming but neither does the gratefulness.

“Makensie is such a humble young lady that as soon as I told her [she won], she just got that shy look. And you could tell she was proud of herself, but she’s not… she’s not a loud, boisterous person,” Khalil said. “She’s more of a humble, wonderful person, and she was the right person to get that [award].”