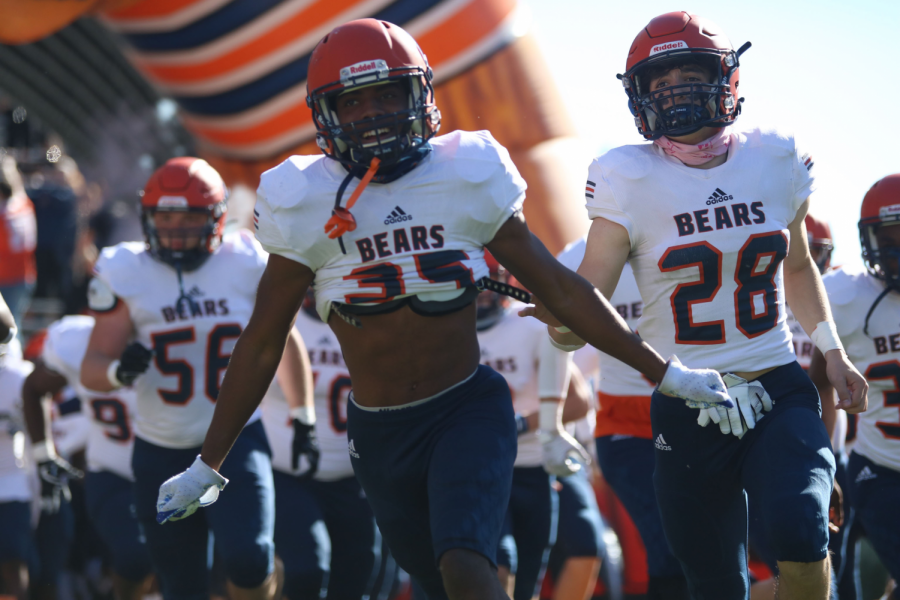 The fairytale story of the Bridgeland Bears’ undefeated season came to a close as Rockwall-Heath handed the Bears their first loss in Waco last Saturday. With a blindside victory of 24-48, the Hawks claimed their spot over the Bears in the fourth round of playoffs

The start of the game appeared promising for the Bears. Zachary Evans, a huge working part of the Hawks’ offense, was put on the injured list due to a torn ACL from the week prior. And with Rockwall-Heath on offense first, they picked up nearly no significant gain with a lively Bear defense. When forced to punt the ball, Bridgeland’s Joshua Ryan was unable to receive the punt cleanly. This mishap would result in a Hawks ball recovery to send their offense back out onto the Mclane Stadium turf.

Rising recruit and starting quarterback for Rockwall-Heath, Joshua Hoover redeemed his first possession with help from his team to send the ball on a rope to wide receiver Jordan Nabors up the middle and into the endzone for a Hawk touchdown and first score of the game.

It was all Hoover and wide receiver Corban Cleveland on their next time out on the field. After Hoover sent the ball to Cleveland to bring up a juggled first down, he spotted him in the endzone again for Cleveland to make a beautiful layout grab. With this play, the Hawks extended their lead to two scores.

The blue-and-orange broke their goose egg on the board on their next scoring charge. Starting quarterback Conner Weigman picked up a crucial first down on the keeper. After the play, the bulldog of the Bear offense Mason Culton went down on the field and never came back on. The Bears were still able to manufacture a touchdown after Weigman sent a laser into the hands of Andrew Maleski behind the goal line.

Bridgeland’s offensive jab was quickly answered with Hawk star Jay Fair running the kick after the touchdown back all the way into Bear territory to tack on another six points to their score. Although the extra point was blocked by the Bear defense, Rockwall-Heath was able to keep the score unfazed by one possession with a 7-20 lead.

The Bear offense came back out on the turf just before the clock ticked down to zero in the first quarter. With a Weigman dime thrown across his body to wide receiver Hunter Wallis to start and another ball on the keeper by the four-star QB, the Bridgeland coaches called upon Ethan Hajdik to get things done at the start of the second quarter. His first field goal attempt was no good, but was reversed with an illegal formation on the defense called by the referees. His second attempt was sent straight into the left goal post, cutting the Bears’ deficit down three points.

With eight minutes and twenty seconds left in the second quarter, the Hawks cleanly executed a short drive up the middle across the goal line to answer the Bears’ newfound offensive awakening. Weigman was able to assemble another touchdown in response by utilizing different players in the drive like Atrevion Hunter, Christian Phillips, and Dylan Goffney. The scoring play consisted of Goffney pulling down Weigman’s throw on his toes to make the new score 17-27.

Showing some fight, Bridgeland cornerback Joshua Ryan intercepted Hoover’s pass to put the ball back into the hands of the offense at the 46-yard line. This sign of life from the Bears was quickly shut down by the Hawks as they recovered a fumble by Weigman on the first play of the Bears’ drive.

The Hawk defense’s efforts did not go unnoticed by Josh Hoover. Hoover used the opportunity to hand the ball off to Preston Landis who in turn carried the football all the way to the goal line where he would dive in for another six points. After the good extra point kick, the new score of the “WTD” showdown was 17-34.

After a field goal attempt from Hajdik, Connor Gower tried to give the ball back to Weigman one more time in the first half by intercepting Hoover’s throw. Even with a good start with a complete pass to Goffney on the bounds’ edge, Weigman was unable to find any success with the shortage on time.

Four minutes into the start of the second half, Brittan Snider for Rockwall-Heath snaked his way into the endzone on the carry. After Hawk cornerback Dez Mims intercepted Weigman’s throw, he put the ball back into the hands of Josh Hoover. Hoover delivered by locating Fair at the back corner of the endzone for another red-and-black touchdown.

The last bit of significant action in the third quarter was the Bear offense trying to counteract such a huge point differential formulated by the Hawks. Phillips on the carry moved the offense to the 20-yard line where Weigman would find sophomore Jordan Wooden to bully his way across the white line for a touchdown.

The final quarter of the game was silent from both sides, but the score was loud enough. The final score of the game amounted to 24-48 Rockwall-Heath.

Rockwall-Heath’s key to their success was their effectiveness of their attack throughout the game. With an interception and three forced fumbles, they transfigured all four turnovers into touchdowns. This is very well reflected in the final score.

While the Hawks ended Bridgeland’s winning streak and playoff run, they also ended the highschool careers of the Bear seniors. Being the first group of athletes the football program has brought up from freshman to senior, Coach Raffield, the head coach of the football team, takes their devastation to heart.

“It’s a heartbreaker. Once we leave that locker room, we’ll probably never get to get together like this again, and just to wrap my head around that is so hard. It’s so hard to understand. To see the pain in their faces is the hardest thing after everything. Hard to shake,” Raffield said.

Although it wasn’t the outcome the Bridgeland community was hoping for, this has been the deepest the Bear football team has ever made it in the postseason bracket. Coach Matt Rader, the Bridgeland receivers coach, thinks that this kind of growth will help propel the future of their program upward.

“It’s a huge step up from last year. Being able to win two times is not an easy thing to do. We just have to make sure to play on and build upon what the team this year has done for us,” Rader said.

In a year full of chaos, one thing stayed stable- Bridgeland football’s fanbase. Coach Rader thinks that even in these times, the Bear fans’ continuous support was unmatched.

“They [fans] have been really great, even in this year when not a lot of them can show up,” Rader said. “The ones that have showed up brought just as much passion as it was when the stands were completely full.”

A fairytale ending to a fairytale season wasn’t the case for the Bears, but an important season nonetheless. Even without the win, the 2020 season will go down as one to remember.

“This group of kids have set the standard at our place [Bridgeland] that will be remembered forever. They have a legacy that will never leave. Ever,” Raffield said.