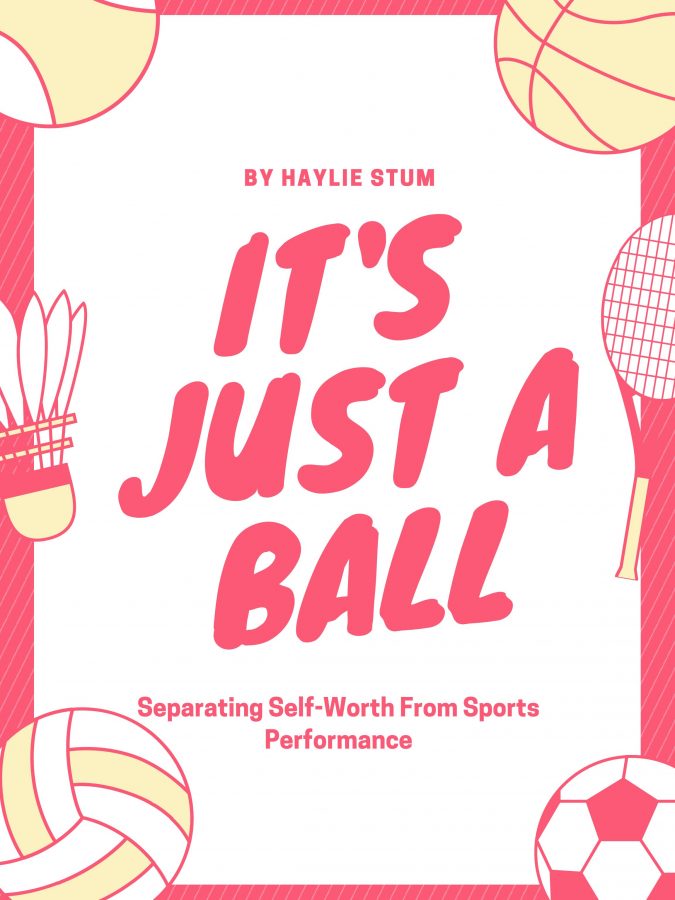 It’s funny how we let a ball control our lives sometimes.

You know, just a ball.

It’s almost an unwritten rule in society to sign your son or daughter up for Little League or the local soccer team at a young age, where you get trophies and after-game snacks just for showing up. The “congrats on picking flowers in the outfield!” orange slices were my personal favorite.

But as you get older, the ball is so much more than that because we let what the ball symbolizes sometimes dictate how we perceive ourselves.

Previous generations played to win because winning was enough. Now, we play to prosper. It’s not for the team – it’s for our personal gain. Sports overtake athletes’ lives with grueling schedules that consist of practices, lessons, conditioning and more to try to further themselves in their field. Moreover, a good amount of said student-athletes leave near to no time for their personal life as they try to balance their academic, athletic and extracurricular selves simultaneously.

The ball stands for a chance for recognition. The ball embodies a chance to satisfy our desire to win. The ball represents a future college scholarship opportunity. The ball makes an expensive education possible.

Disappointment with subpar performance in a match or game is absolutely normal. Actually, if you’re not upset by a poor outing in your sport, that’s unordinary. But sometimes, or most of the time, we like to associate our quality of play to the quality of person we are, which shouldn’t be normal, but sadly is.

It’s easy. It’s easier to use results to define who we are rather than introspection. Introspection is a good long look in the mirror, and insecure teenagers, like myself, would rather look at the reflection of what they did rather than the reflection of who they are. That’s why it’s so hard to not let the outcome of how you played in your sport dictate your self-worth. It’s commonly assumed that since we put so much of ourselves into our sport that it should tell us who we are in return.

There’s an old saying that “where you spend your time tells you where your heart is at.” While this saying is true, it fails to mention that your time does not reflect what’s in your heart. And with athletes, it’s hard to find extra time to explore that.

33% of all college students experience significant symptoms of depression, anxiety, or other mental health conditions. Among that group, 30% seek help. But of college athletes with mental health conditions, only 10% do. Where do we end the cycle? Is it up to us to break it? Or will we continue to enable the neglect of ourselves to put our sport on a pedestal?

The answer is simple. Because, again, it’s just a ball.

I know that feels like such a cliche answer, but it really is true.

Differentiating the athlete from the actual sport is something that has become astray in today’s times, and it is something that should be at the forefront of developing athletes. Poor mental health from stress has become a hot issue, and it is impossible to tackle this problem if we don’t first tackle the identity problems athletes have before they even step on the field.

It’s a known fact that humans are complex beings. We love, we hate, we ponder. Using superficial factors, like touchdowns or three-pointers, to determine the deep meaning of our worth makes zero sense. It only makes us more lost on that journey to success that our sport is supposed to help us with.

And, it goes both ways. We shouldn’t tear ourselves apart for failing to execute in a game or match, but we also shouldn’t create this sense of invincibility if we do execute. If you do, life will find a way to make you feel the opposite in some form or fashion. Allowing yourself to play the game and not letting the game play you is crucial to finding a balance within yourself.

There’s a person behind the football helmet. There’s a name on the jersey. You have an identity first before you have athletic skill. Because one day, the cleats come off for the last time, and the jersey is packed away or handed down. No matter how long you play or how well you play, there will always be a point in your life where you are separate from your sport. Don’t let there be an absence of identity because you had an absence of self-realization.

At the end of the day, it’s just a ball. A ball that doesn’t have feelings or emotions. In its place, cultivate a positive sphere of influence around you and find your worth on your own. Don’t let a sphere, a silly little ball, dictate that worth.