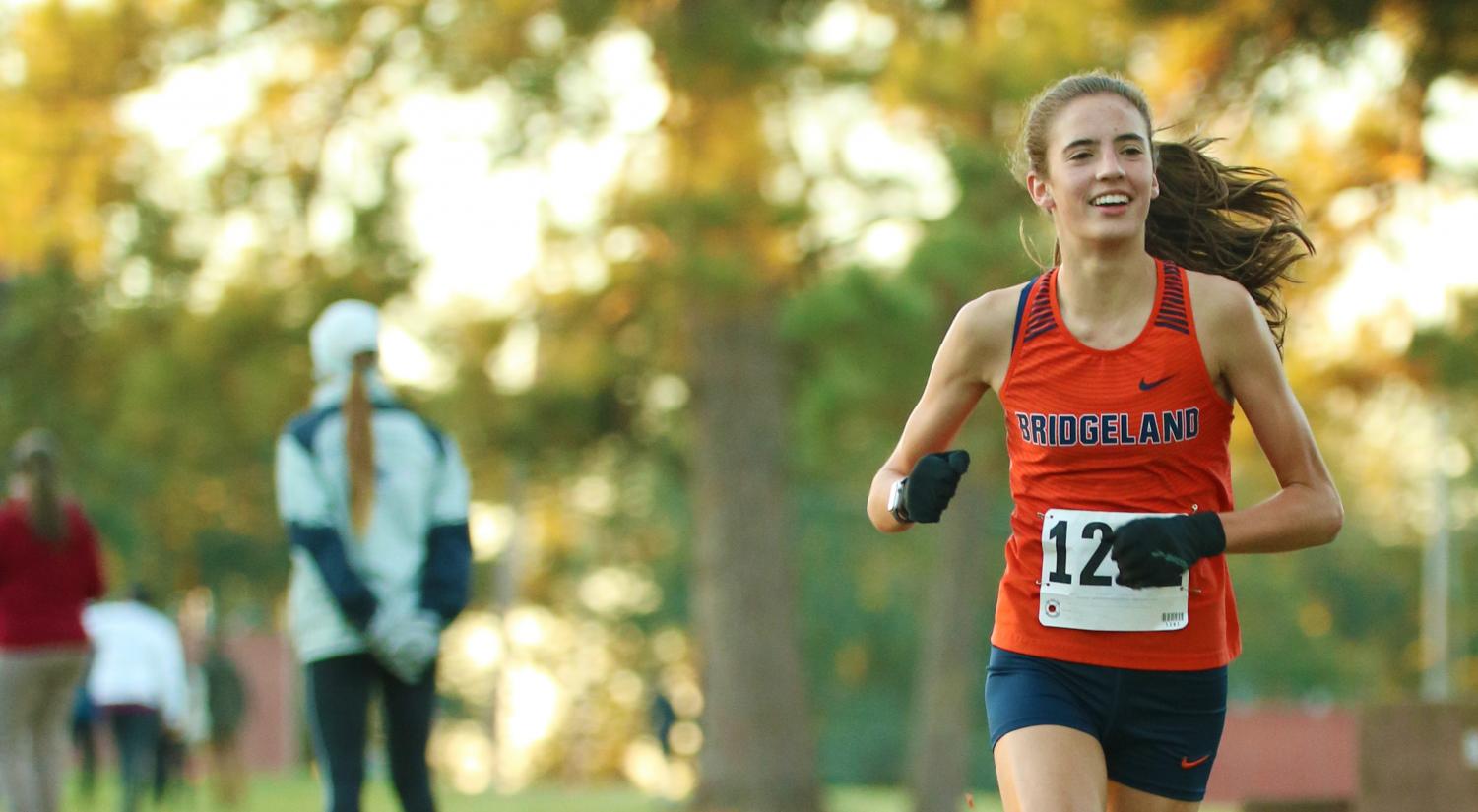 Running With A Pack: How Sophomore Finds Success In Cross-Country Through Support From Others

Wake up at 4 a.m., stretch for 30 minutes, go to cross country practice, go to school, get home and do homework, get home from soccer practice around 10, go to bed around 11, and everything in between. This is a normal day for rising Bridgeland sophomore Emily Ellis. But behind these grueling days is the overwhelming love and support of her family and friends, and that is what keeps Emily on the hunt for her personal best.
On September 26, Emily Ellis broke the all-time CFISD record for the 5,000-meter run and replaced it with her own time of 17:32.32. The next week she finished third in the Nike South Invitational, only being beaten by 2 seniors from prestigious programs- Katy Tompkins and Katy Cinco Ranch. She then finished first place overall in the CFISD District Championship, leading her team to a first-place finish and advancement to the Region 2 Championship. These accolades earned her the 28th all-time mark in Texas. With this kind of success, one would be quick to assume that Ellis is a very experienced runner, but the reality is quite the opposite. Her running journey is nothing short of abnormal, but it is the abnormality that sets her apart from the others.

In elementary school, Emily always had a knack for running. She always wanted to race her friends or do something where she could run. She took this into soccer, where she fell in love and found her passion for the sport. When seventh grade hit, she wanted to sign up for athletics to further her conditioning, but in order to be in the program, you had to play a sport, and they didn’t offer soccer.

“Why not cross country?” her mom suggested. “You run a lot in soccer.”

It was with this suggestion from her mother that she took her first step in the world of cross country. She ran for two seasons at Salyards Middle School and decided that was where her running career was going to end. She set her sights on playing on the Bridgeland soccer team, she dedicated her focus to that goal.

Emily ended up playing forward for the Bridgeland varsity soccer team as a freshman, and despite achieving her end goal, she felt something was missing. She thought back to the “good old days” where she was able to work through problems, train, and surround herself with her friends all the time, and noticed a common thread tying them together – cross country. As she looked over the times her XC-running friends had recorded in high school, she concluded that if she trained hard over the summer to get back in running shape, she could possibly get to where they were at. 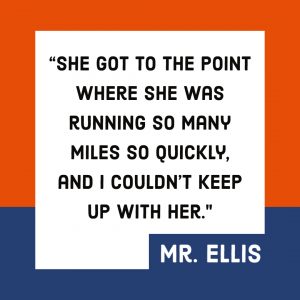 In the summer, Coach Tom Kennedy sent out a weekly Excel worksheet that would have the required miles for that week and a long-run time – running as far as you can for the given amount of time. Most of the day, Emily would train for club soccer or extra technical training during the middle of the day. Around 7 to 8 p.m., she would go out and run however many miles she needed to around the lake in the neighborhood. To keep her on the right pace, her dad would set his electric scooter to the desired speed, and Emily would try to stay with or pass him.

“She got to the point where she was running so many miles so quickly, and I couldn’t keep up with her,” Emilly Ellis’ father said. “So, I tried getting on a bike a few times, but it was really hard to set a pace because I didn’t have a way to control the speed of the bike well enough to keep her on a steady pace. So, I started thinking about it and I ended up buying a few electric scooters just for fun in the beginning so the kids could have something to ride around the neighborhood, and I thought that the scooter would be good for it because it has a really long range. It will go 40 miles per hour on one charge, and it has an app that you can download for your phone with GPS on it to plot out where you want to go, and it’ll map out distances on it. It’ll also read speed to the tenth of miles per hour, so I thought it would be pretty cool to pace her with. It also has cruise control on it so you can set what speed you want it at and it’ll continue at that speed. So as long as she keeps up with it, she knows she’s running the pace that she’s shooting for in that particular workout.”

Continuing this schedule with no off-days, she saw in the early XC practices that she was indeed at their level and that she needed to keep advancing in order to make it to the top. Emily claims that this taxing schedule of training for soccer and cross country at the same time paved her road to success. By using a “summer miles equal fall smiles” mentality, she made sure to maximize her quarantine and summer days to their fullest.

“She’s one of the most driven people that I’ve been around whether it comes to athletics or academics,” Emily Ellis’ father said. “She’s really focused, and she takes it very seriously. She’s intense and always wants to win. She always wants to do the best job that she can, whether it’s her schoolwork or soccer or cross-country. I don’t think she’s missed one single workout that Coach Kennedy has prescribed to her since she started. She hasn’t missed any practices or meets. She’s on top of her runs and her workouts, and she does them the way they’re supposed to be done. She doesn’t stop during her workouts and take water breaks and rest or pause her watch and restart. She does all her workouts start to finish.”

Her pure determination and competitive spirit weren’t all that pushed her to become the best; it was the love of the people around her. Surrounded by a huge support system of friends and family, Emily feels she is able to thrive and grow as an athlete.

“Both my parents have really been there for me throughout my journey, my brother has been the sweetest little kid throughout all of this, and my grandparents always come to all my [soccer] games and all my [running] events. They’ve all been so supportive and they’re definitely a motivating factor in me continuing athletics, both soccer and cross country,” Emily said. “They’re always with me and always there to help if I need it.”

“I think she could do it on her own if she really wanted to. I just think she really likes having a support network around her of people she can rely on to help motivate and encourage her,” Emily Ellis’ father said. “My parents really moved here to Texas to be around the kids and their grandkids….They spend as much time going to her events as they can. If she has a soccer game, they’re there. If she has a cross-country meet, they’re there. If she’s doing any other extracurricular activity that they can watch, they go. That’s kind of one of the things they enjoy doing is being there for Emily and supporting her.”

Even outside the Ellis bloodline, Emily encircles herself with people who truly care for her.

“It’s really nice being able to get to see my fellow teammates who are some of my best friends and train and work hard with them. They’ve been really welcoming to me and they’re definitely a second family,” Emily said.

“She really wasn’t sure what to expect when she joined the cross-country team, and the girls on the team have been really accepting of her and have helped her along with the routes that they run and things of that nature. You can get on some teams that have some cliques and people that aren’t as welcoming as they could be, and that just hasn’t been the case. The girls have been very nice and very welcoming to Emily, and she really appreciates that. She felt immediately like she was a part of the team’” Emily Ellis’ father said. 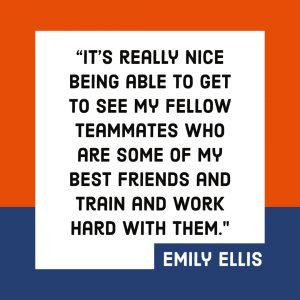 Her new goal is winning the regional meet in Dallas – a tall order, but definitely in reach for the up-and-coming sophomore.

“I’m just blown away that she just continues to manage to do it all and excel,” Emily Ellis’ father said. ”I just think to myself that I would be so exhausted and probably get burned out on it. But, she’s just laser-focused on it and it’s what she wants to do. So, I just support her as much as I can and do as much as I can to get her to where she needs to be as far as events, meets, and practices. I try to help her to stay motivated and healthy.. Her motivation is intense, and I don’t really have to do much to motivate her myself. It’s all her. She wants to do it, and I just try to do things to keep her going and pointed in the right direction.”

If you want a picture to show with your comment, go get a gravatar.